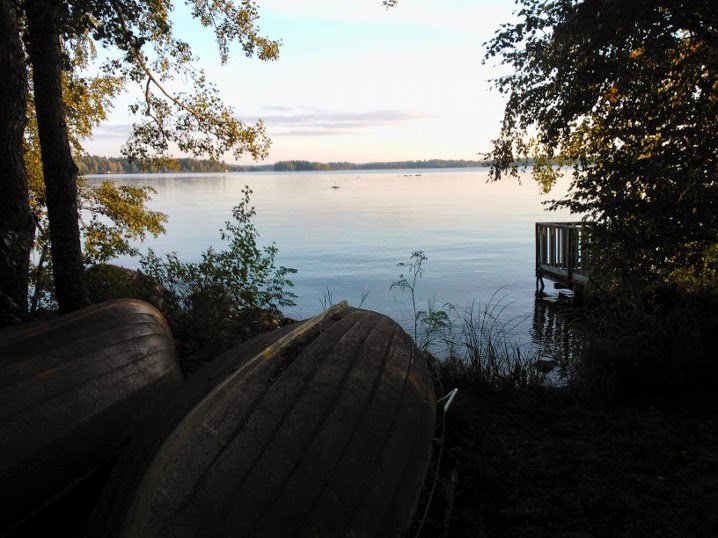 At the start of this month I was in Finland, discovering new sides to my home country. I’ve lived abroad for nearly six years now, and I’ve found that different things about Finland have been more conspicuously absent than others, at different times. For example, to begin with, I missed foods I couldn’t get in the UK. Then I really felt the loss of ‘feeling native’. At various times I’ve lamented not having this or that in the UK, and there was even a phase where I started noticing all the things I can have in the UK, that I couldn’t have in Finland (a job?).

This trip was a little different. The topmost thing that I paid attention to in Finland was peacefulness, and a slow pace of life. Maybe the contrast was what struck me – my life in London has possibly become more hectic recently. My home is in Tampere, which is a major city and a growth centre, but it felt like an oasis of calm. No aeroplanes. No bus route under my window. Lots of trees, lots of dogs, lots of families and cycling. Greenness and space. Going to bed when the sun is still out. Open roads. Footpaths in woods. (Gnats.)

Because I was so affected by an overwhelming sense of laissez-faire, simple, slow living, I tried to put my finger on what was the source of it (so that maybe I could achieve it in London). These are some of the things I think contribute to it.

Finns like to go on about how pure and peaceful our nature is. It’s all true. Finland is mostly water, mostly clean water — it’s called the land of a thousand lakes, though there are more than 168,000. The rest is forest full of blueberries, lingonberries, cloudberries and mushrooms, and bears, wolverines, lynxes and wolves (full-ish). Take a look at this nature p*rn video:

This is, unfortunately, hard to find in London, but I did the next best thing. I bought a bottle of perfume called Rain (this one) that I thought smelled pretty much like Finland after it has rained. It’s quite dandelion-y, and fresh, and every time I put it on, I’m trying to bring to mind a quiet footpath in a wet forest. Another idea would be to travel more in the UK. Finland is amazing, but I imagine the English countryside on a summer Sunday, a pint and a walk would get me to the same state of mind.

I’m not going to claim that all Finns have unobtrusive egos, but I think the Finnish soul in general is more easy-going, harder to offend and satisfied with less attention than most other nations’. In a similar way to the English tendency to deflect attention, Finns are more comfortable talking about other people. In fact, sometimes they’re most comfortable not talking at all, which admittedly is not one of the things I miss. I’ve been thinking about resilience a lot lately, and I think a pre-requisite to withstanding negative events and emotions is to have a small ego. The Finnish variant is such that you do have a good self-esteem — it’s not about undue humility — but it’s not something that would occur to you to notice. There’s something wonderfully outward-facing about it, like you think other things are more important, and doing things is more worthwhile than thinking about how you might be feeling.

London work culture can be quite ego-stroking. There’s more of a focus on personal achievement rather than team effort. I wrote about how I’d like to work as a team more in the post about the cult of the editor — I think it ties into the same thing. When you do well, you get thanks and praise, and your ego is boosted. When you do badly, you don’t necessarily get blamed, but because you get conditioned to think that wins are mostly to do with you, by the same token you assume losses are mostly to do with you, too. But your fat ego doesn’t like that, and the whole thing turns into a spiral of self-recrimination and excuse-making. I’m going to try to leave my ego out of it whether I do well or badly. And think of lakes.

Another crude generalisation, but my impression is that most Finns’ careers are in the service of their personal lives, not the other way around. Finns are big on hobbies and pastimes, disappearing to their internet-less summer houses for weeks in the summer. Even the Prime Minister takes time off. This July, the Minister for Education played PM for a week. I know Finns with big jobs and small, but they mostly care about having a good life outside of work.

I’ve never liked to work on the weekends, evenings or even on my way to work. I feel very strongly that that time is mine, and I want to spend it doing non-work things. I think I could take more leaves from the Finnish book, and remember that work should pay for my life, but my life shouldn’t pay for my job.