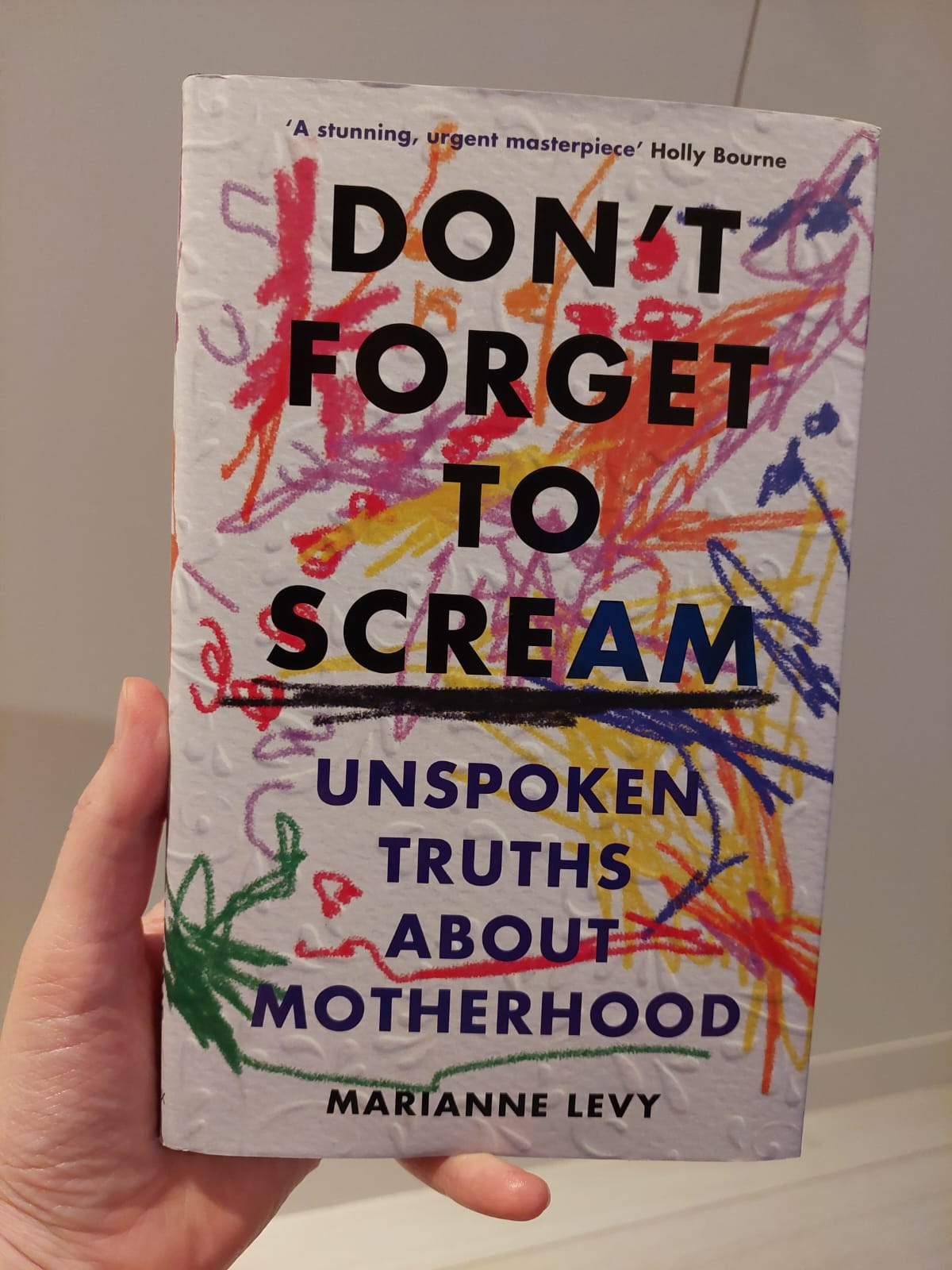 A little while ago I poured some feelings of resentment and generalised anger about having small children on an unsuspecting friend. Now that friend has sent me a new book: Don’t Forget to Scream – Unspoken Truths about Motherhood by Marianne Levy which came out a few weeks ago. It’s a collection of essays written when her two children were small, and I read the first three in one sitting.

This is going to be a good read, I can tell, even though the subtitle made me worried it was going to be like The Unmumsy Mum, which I arguably read at the wrong time and which duly rubbed me the wrong way. The toddler had just been born and I wasn’t in the mood to be told how hard and annoying it was going to be.

Of course, now that I’m in the middle of the hard and annoying bit (or… maybe just at the start of it – don’t tell me), I’m game to hear people moan about their children all day long. Not that this book looks to be an extended whine. Not at all – it’s poignant and funny observations on my exact season of life, but with comforting / encouraging insights that I certainly haven’t been able to draw on my own.

The most relatable passages for me in the bit I’ve read so far were Levy talking about the loss of a totally separate identity:

[B]y the third trimester, distended and sloshing with amniotic fluid and extra blood and a whole entire child, what was left of my pre-pregnancy self seemed confined to a control tower … Even my feet grew bigger as my very ligaments loosened, as the boundaries of my selfhood grew correspondingly slack. They don’t ping back, by the way.

Four of the last six years have been spent literally unsure of how much space I have been occupying, first swelling with pregnancy, then the sudden deflation, then a baby strapped to my chest, my hands on a buggy or a toddler on my hip. Crossing a room has required feverish geometry, apologies and scattered chairs.

So thank you Mary-Ann!

So that’s women being vulnerable – what’s going on with vulnerable men these days? Well. I’m finding the drama around Braden Wallake’s tearful LinkedIn post quite interesting. My read of it is that he was posting earnestly, but that he should have recognised the self-indulgence in it. Therefore I think it’s fair game for mockery (and criticism – but not the personal attacks). I saw a lot of comments about how the frankly delighted parody posters are perpetuating the problem of men’s suicides and stigma on displaying vulnerability. It feels intuitively far-fetched, but I guess it’s possible.

Of course, one of the basic functions of society is that the power of communal approval and disapproval can shape individuals’ behaviour. This is good when the accepted norm is beneficial and bad when it’s not. So which norm is being enforced in this case – ‘men shouldn’t cry in public’ (broadly speaking a harmful norm) or ‘people shouldn’t be self-centred’ (broadly speaking a beneficial one)? From what I was able to see it’s the latter. None of the comments I saw were criticising Wallake for being unmanly; it was all about him being disrespectful of his former employees and making himself the centre of attention.